Philip O’Donnell, a medical student at Weill Cornell Medical College, will travel to Tanzania this summer to work on a research project with the neurosurgical team there. O’Donnell, who is between his first and second years of study, will work with Dr. Maria Santos collecting data on all patients admitted to Bugando Medical Center (BMC) in Mwanza, Tanzania, with a diagnosis of traumatic brain injury (TBI). BMC has implemented an IRB-approved database for traumatic brain and spinal injury to monitor patient care and improve outcomes.

Neurotrauma is a leading cause of death and disability in the vastly under-served nations of East Africa, and it has been a strong focus of the Neurosurgical Mission in Tanzania led by Dr. Roger Härtl. Dr. Santos, a former pediatric neurosurgical fellow at the Weill Cornell Medicine Brain and Spine Center in New York, now works at BMC year-round and will oversee O’Donnell’s research.

O’Donnell served as a logistics officer in the U.S. Marine Corps before being accepted into medical school, and he has seen his share of neurotrauma. He spent seven months in Helmand Province, Afghanistan, where he managed helicopter airports, and although he was not in combat himself he knew many others who suffered orthopedic or neurotrauma injuries, primarily from roadside bombs.

“Seeing some of the medical teams involved in the care of wounded Marines was very inspiring,” he says, “and it made me become more interested in neurotrauma, orthotrauma, and surgery in general.” O’Donnell describes his broader interests as global health, quality assessment and improvement, and surgical and emergency medicine.

“I have always had some interest in global health,” O’Donnell says. “I have been on a few medical missions to Haiti over the last decade, and my time in the Marines only enhanced this interest. Serving and protecting those with the least resources is an integral part of being a Marine, and I wanted to continue this in my medical career. I think becoming involved and learning more about global health is part of that.”

This early in his medical education, O’Donnell says he’s not sure yet about what his specialty will ultimately be. “There are so many interesting and challenging fields in medicine,” he says. “I am leaning more to the surgical specialties, or maybe emergency medicine, but I don’t want to rule anything out at this point.”

This summer, O’Donnell will be participating in a project where his help is critically needed. The World Health Organization recommends that all countries have one neurosurgeon for each 100,000 residents, but in Tanzania the ratio is 1 in 13 million. Many Tanzanians, including thousands of children, die each year from hydrocephalus, encephaloceles, head and spinal trauma, and other correctable conditions. There are only five neurosurgeons in Tanzania, which leaves millions of Tanzanian citizens with no access to basic neurosurgical care.

O’Donnell will be in Tanzania for eight weeks, returning to the United States — and his second year of medical school — in August. 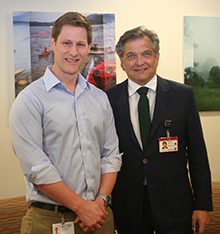 Dr. Jaspal Ricky Singh was recently interviewed for a Huffington Post article, The Best Workouts to Do if You Have Back Pain. In the article, Dr.…

Each year, Castle Connolly releases lists of top doctors nationwide – a prestigious list of specialists in many conditions. The selected doctors in…