Spinal discs play a crucial role in the lower back, serving as shock absorbers between the vertebrae, supporting the upper body, and allowing a wide range of movement in all directions.

If a disc herniates and leaks some of its inner material, though, the disc can quickly go from easing daily life to aggravating a nerve, triggering back pain and possibly pain and nerve symptoms down the leg. 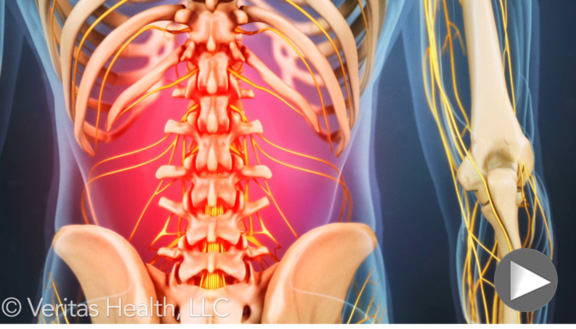 Disc herniation symptoms usually start for no apparent reason. Or they may occur when a person lifts something heavy and/or twists the lower back, motions that put added stress on the discs.

This article covers how a lumbar herniated disc develops, how it is diagnosed, and the available surgical and non-surgical treatment options.

How a Lumbar Disc Herniates

A tough outer ring called the annulus protects the gel-like interior of each disc, known as the nucleus pulposus.

Due to aging and general wear and tear, the discs lose some of the fluid that makes them pliable and spongy. As a result, the discs tend to become flatter and harder. This process—known as disc degeneration—starts fairly early in life, often showing up in imaging tests in early adulthood.

When pressure or stress is placed on the spine, the disc’s outer ring may bulge, crack, or tear. If this occurs in the lower back (the lumbar spine), the disc protrusion may push against the nearby spinal nerve root. Or the inflammatory material from the interior may irritate the nerve. The result is shooting pains into the buttock and down the leg.

While a lumbar herniated disc can be extremely painful, for most people the symptoms are not long-lasting.

About 90% of people who experience a lumbar herniated disc will have no symptoms six weeks later, even if they have had no medical treatment.1

Experts believe the symptoms from a lumbar herniated disc may resolve themselves for three reasons:

In general, it is thought that the symptoms get better because the smaller size of the herniated material reduces the likelihood it will irritate the nerve root.

Although a lumbar herniated disc usually triggers attention when it becomes painful, medical research has found it is common for people to have a lumbar disc herniation in their lumbar spine, but no associated pain or other symptoms.2

It is for this reason that care must be taken in the diagnosis to be sure a herniated lumbar disc is causing the problem.

A herniated disc may be referred to by many names, such as a slipped disc, or a ruptured or bulging disc. The term slipped disc can cause confusion since spinal discs are firmly attached to the vertebrae and do not slip or move—rather, it is just the gel-like inner material of the disc “slips” out of the inside.

Another common term for a herniated disc is a pinched nerve. This term describes the effect the herniated disc material has on a nearby nerve as it compresses or “pinches” that nerve.

We’ve Got Your Back

For more information about our treatment options, contact our office today.

Request an Appointment
Back to the top